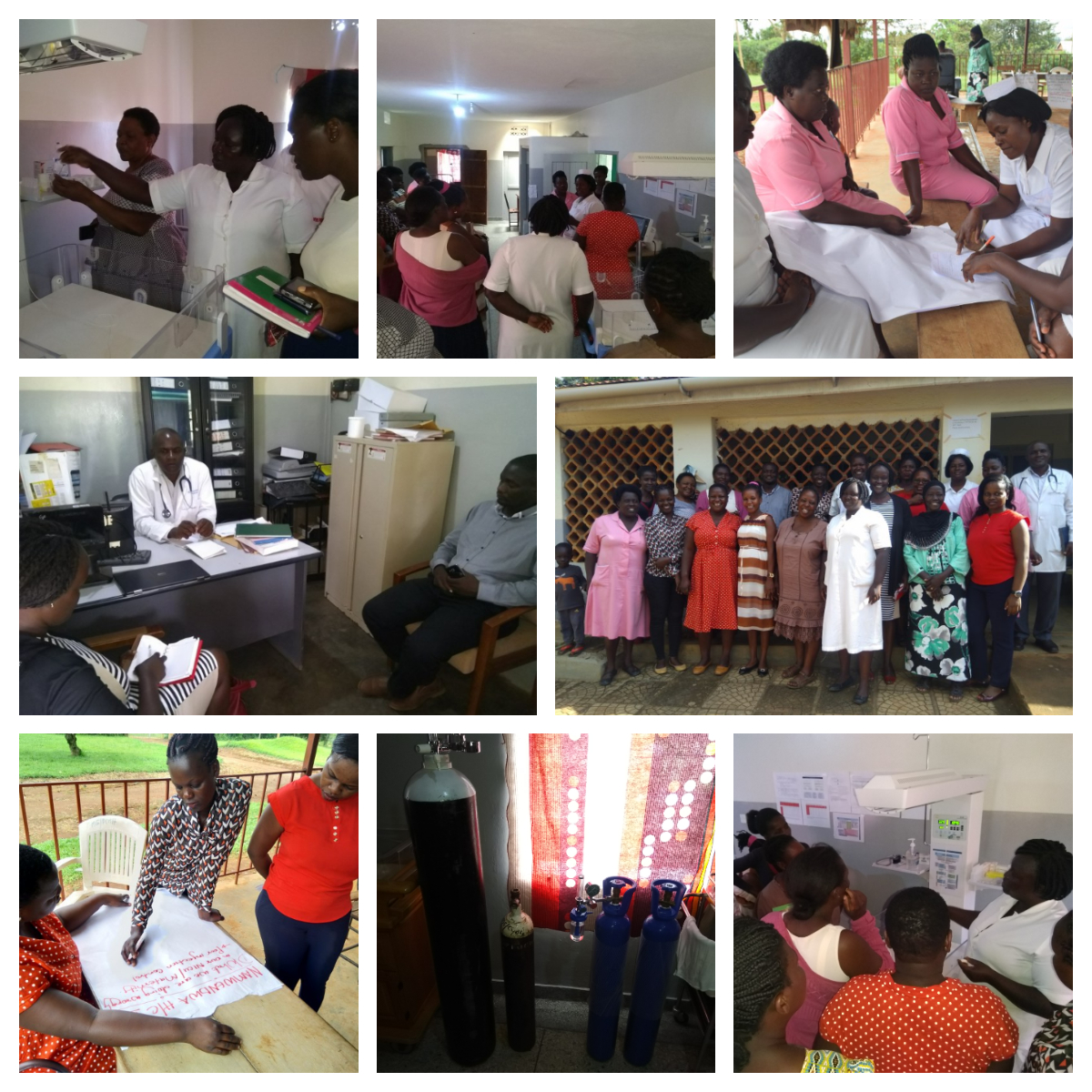 From explaining how to mix drugs in the right doses for premature babies to explaining how a radiant warmer works, Nursing Officer Sarah Mirembe clearly knows what she is doing given the confidence she exudes. It is apparent from her talk that she has no problem with dump dusting and mopping her workstation in order to post good results. To her, a cleaner may not appreciate why her workstation must be clean. This is a routine Sr Mirembe who heads the Newborn Care Unit and colleagues have embedded in their lives at Kigandalo Health Centre IV in Mayuge District, Eastern Uganda.

“We make the most out of every mentorship visit and that is why each one of us is now confident giving treatment to premature babies and other sick newborns. The situation is the same when it comes to identifying high risk mothers and giving the right interventions,” said Ms Mirembe as she talked to a visiting group of fellow midwives from five other Health Centre IV facilities on a learning excursion.

The initiation of these NCUs has been through remodelling/renovation of designated spaces within or next to maternity wards, refresher training and mentorship, and provision of catalytic equipment and medicines. With the planned government policy of activating all Health Centre IVs to provide emergency obstetric care, having NCUs to offer lifesaving standard care at such facilities is critical.

According to Dr Monica Okuga, a co-team lead on MANeSCALE, Kigandalo is the best performing unit in this network of six and the visit was organised to inspire the others, into providing the same services. Kigandalo admits on average 30 babies per month and has not had any death for the last six months.

“We wanted them to have a feel of what Kigandalo has done right from the setting up of their NCU, to what they are doing that has made them shine. It is more of a learning session for all of them,” she said during the visit. “There are cases that can be worked on at Health Centre IV level without being referred. It is these cases that we would like to see these facilities handle without risking the lives of babies because in many cases the mothers do not honour these referrals for one reason or another the most cited being lack of transport.”

Overwhelmed by the level of commitment and self-motivation exhibited by colleagues at a facility within their league, the visitors didn’t mind disclosing some of their weaknesses, which they said were avoidable and pledged a turnaround within the shortest time possible.

“I am inspired and do not mind bearing in the open our weaknesses. There is documentation here but, in my facility, there is a lot of laxity. We give treatment and you see drugs running out and clients being discharged but there is no evidence to show that drugs were administered,” said a visiting health worker.

Added another: “Unlike here where they have emergency medicines on the ready, in our case while we have them on the ward, you have to do some running around to get them. This is an attitude thing which we must change. There is no reason as to why we are not preparing for emergencies.”

None-the-less, despite the success registered by Kigandalo, it has challenges ranging from understaffing, intermittent power supply, and not having enough incubators. According to the Health facility in-charge Dr Asuman Basembeza, while his staff are currently committed and have vigour, they are bound to break down given the increasing patient load.

“Staffing norms for midwifery for Health Centre IVs has remained static despite the increase in patient load and services provided. We have only four midwives and they are running the theatre, antenatal and family planning clinics, expected to be in the labour suite, and also administer treatment on the wards. There is also the newborn care unit and the cancer screening unit,” noted Dr Basembeza calling on government to revise the staffing structure. “Districts should be in position to allocate staff based on the output of facilities.”

A subsequent visit to the other facilities found varying challenges but that of inadequate supply of electricity/power black outs with lack of backups cut across all save for Bumanya which has a recently installed and working solar system.

The MANeSCALE Project pledged to provide a power backup system to Kigandalo and to continue with supply of essential newborn care medicines, as well as mentorship and training through the project lifeline. This will also be done for the other five health centre IVs providing newborn care.

To this, Kigandalo health centre IV provides a model newborn care unit for other facilities at this level starting off with what is available. However for success, there should be inputs in terms of drugs, equipment and human resource as well as adequate space for the newborn care units.