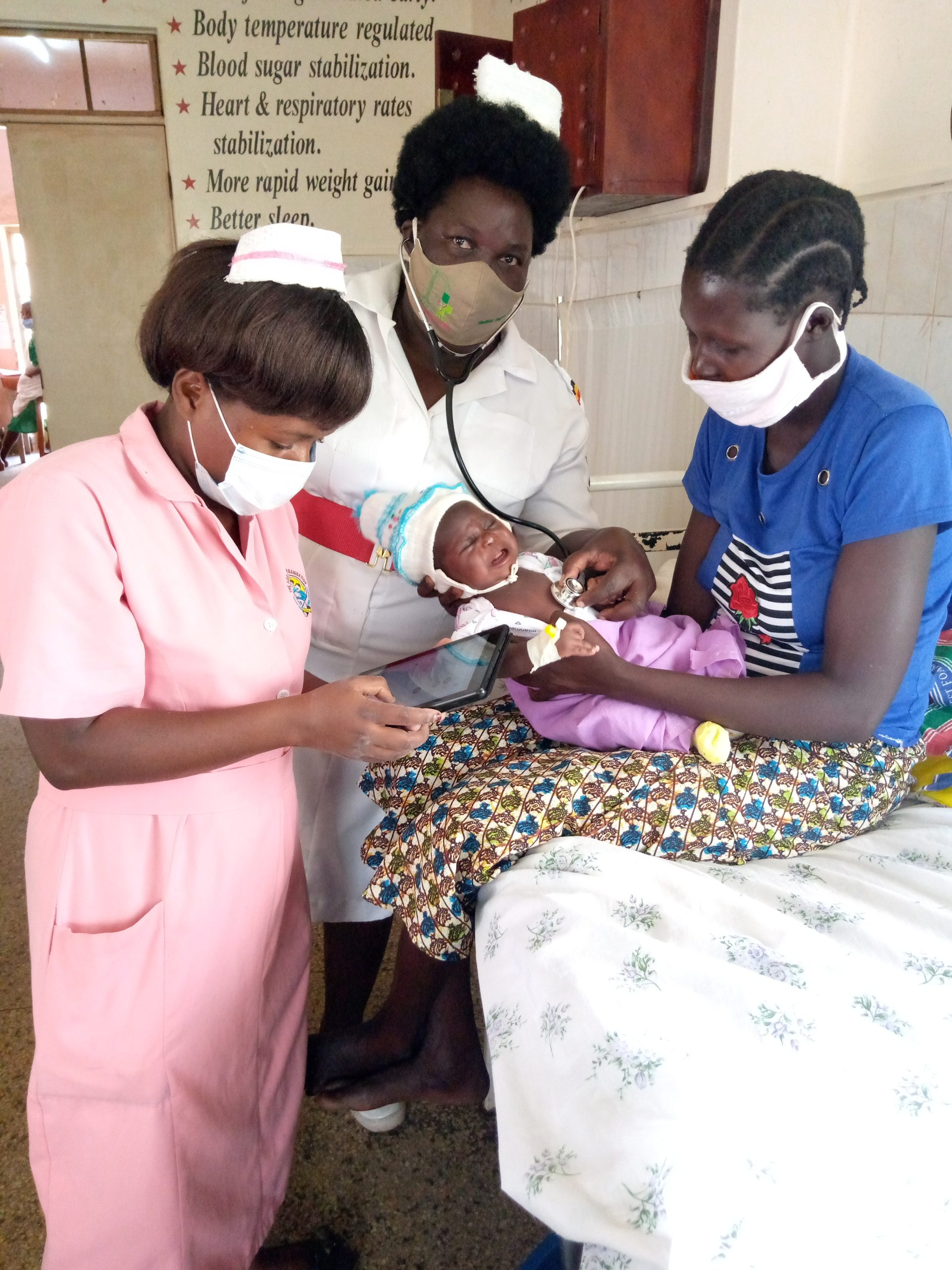 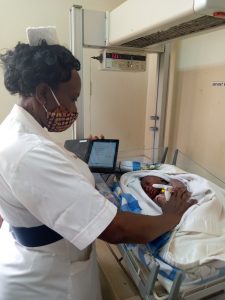 At the Centre we had an opportunity to speak to Sr Mary K Muhindo about her work with NoviGuide software in Tororo General Hospital and below is our discussion via zoom.

QN. Who is Mary Muhindo?

ANS. Mary is a post-doctoral fellow with Preterm Birth Initiative, University of California San Francisco, wife, mother of 4 and a Ugandan doctor who is very passionate about newborn health in rural Uganda where she has worked for over 10 years. She is working towards improving newborn health in rural Uganda hence being part of a team at Infectious Diseases Research Collaboration and Global Strategies studying NoviGuide in Tororo General Hospital and looking at widening the scope to the whole of Uganda.

QN. How can you describe NoviGuide in simple terms for one to understand it in a lay man’s language?

ANS. NoviGuide is an app on a tablet that helps nurses in their day to day operations during the care of newborns including initial assessment, rounding and discharge. NoviGuide software was developed by Global Strategies, a US NGO, to make midwives’ work easier while they work. In rural Uganda, midwives are the main care providers for sick newborns. These ladies are very hard working but they are understaffed, lack resources and supplies needed to care for newborns and because of the high staff turnover they lack newborn care skills. There is need to support them in terms of skills and this should be continuous. For example before NoviGuide roll out, midwives used phone calculators or made mental calculations for the complicated weight-based medications and fluids doses that sick newborns needed. This delayed care delivery and resulted in wrong dose calculation.

QN. What resources does the NoviGuide software have?

ANS. The NoviGuide has three main resources; 1) A resuscitation video that midwives can watch to remind themselves of the resuscitation skills, 2) Point-of-care algorithms which have different newborn assessments that guide midwives to enter information like weight and age of the newborn, clinical presentation and then provides guidance and automated medication and fluid dosages including which medication to give, how often to give and how to mix the drugs, 3) A self-teaching component, an e–book with information about common newborn conditions. NoviGuide also has a monitoring component where a midwife can report supplies shortage in the hospital at that time of treating or caring for the newborn. Basically, the software is all round and can enhance the midwives’ skills for better newborn outcomes.

QN. NoviGuide sounds very resourceful, take us through the process of its inception into Tororo Hospital?

QN. What were some of the key findings from the NoviGuide pilot phase?

ANS. Midwives were very satisfied with using NoviGuide whether they had experience with technology or not. NoviGuide saved time, simplified their work, prevented mistakes and improved the midwives knowledge and confidence in caring for newborns at the hospital. The E-book was good but not used often because the nurses were always busy with duty overload so there was limited or no time for self-teaching while on duty. For the new version of NoviGuide, we replaced the e-book with videos like breastfeeding videos that midwives can show mothers of the newborns and many other videos.

QN. Okay, that is good; what are some of major highlights and achievements that have been registered?

ANS. I can say that midwives have been empowered to care for newborns using technology. If you come to Tororo now, you will hear midwives say, “NoviGuide that baby” or “Have you already NoviGuided the baby?” NoviGuide has been adopted by the midwives. NoviGuide eased the heavy load on the midwives because we found that it takes a minimum of 2 minutes to review a newborn using NoviGuide and this is an easy way of doing things in our setting. In addition to that NoviGuide usage data provides a clear picture on how many babies have been seen at the hospital, which conditions they have in addition to monitoring drug stock levels among others.

QN. Great, sounds like a revolution in newborn health, which other stakeholders were you engaging during this plot phase of the NoviGuide?

ANS. We worked with a team of Ugandan experts recommended by Dr. Rebecca Nantanda. These experts included; Dr. Victoria Nakibuka, Dr. Jolly Nankunda, Dr. Tom Ediamu, Dr. Harriet Nambuya and Damalie Mwogererwa. This team reviewed NoviGuide to ensure its clinical content aligns perfectly to the Uganda guidelines and the local context. The experts suggested minor edits to NoviGuide and approved its use in our study.  We also worked with the hospital medical superintendent, Dr. Ochar Thomas, the Tororo District Health Officer, Dr. Okumu David and Prof. Peter Waiswa for guidance on how to conduct the study.  We hope to share our results with Ministry of Health team to create demand because NoviGuide has the potential to improve newborn care in our settings. Prof. Moses Kamya, Dr. Theodore Ruel and Dr. Joshua Bress mentored me through the data collection, analysis and publication process.

QN. Great, what is the future of the NoviGuide?

ANS. In addition to empowering health care workers, NoviGuide’s usage data has potential to be used by the hospital administrators and Ministry of Health officials to monitor activities like how many newborns are reviewed at the hospital, stock levels and organizing referral systems.  We hope NoviGuide is included as one of the RBF (Results Based Financing) as one of the incentives because it is a tool the midwives found very satisfying and important. We look forward to working with Ministry of Health and other partners interested in improving newborn health in LMICSs like Save the Children, UNICEF, WHO and many others.

QN. Okay, lets hope for the best on that, now the health system in general what recommendations do you have?

ANS. To improve newborn care in LMICs, we need good infrastructure, functional health systems and well trained, confident human resource. NoviGuide empowers the human resource to care for newborns in our settings and its usage data can be used in one way or another to improve the function of the health system and use of available resources at the hospital. NoviGuide has great potential in transforming newborn care in our settings. Currently, we are studying how NoviGuide can be rolled out at other sites by trained midwife Trainers and whether NoviGuide can ease the use of oxygen saturation monitors in our hospital. If technology has been successfully used to improve services elsewhere how much more among our midwives to care for the next generation (the newborns).

TESTIMONIES FROM BENEFICIARIES OF NOVIGUIDE 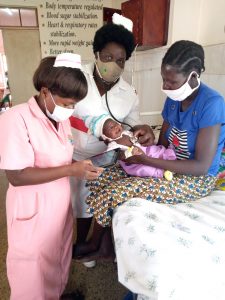 Sr. Atim Grace, in charge Postnatal ward, Tororo General Hospital-  NoviGuide is a simple tool designed to help midwives and nurses to manage newborn babies. It has simplified our work and it helped us to calculate the dosages and fluids of sick newborns. We have seen better prognosis and reduced death at our hospital. NoviGuide has helped us and should be placed at many other hospitals to help midwives care for newborns.

Sr. Beatrice Musungu, In charge Labour Suite, Tororo General Hospital: “First and foremost, NoviGuide is a good innovation. It has made our work simplified. Instead of running around looking for the doctor, NoviGuide is our immediate doctor. Where one needs a calculation for drugs, everything is available. No more guess work. Finally, NoviGuide gives us confidence in whatever we are doing. I have even seen the mothers happy when we use NoviGuide. The say they feel safe when their baby is entered in the computer.”